Home Locating In ActionSHDI in Azerbaijan

The Schonstedt Humanitarian Demining Initiative (SHDI) continues to help save lives in countries that need it the most. Here’s a recent posting from the Azeri News Agency (APA). 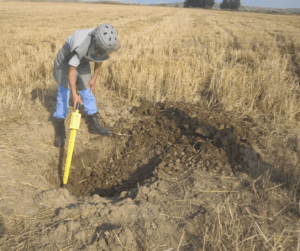 Demining specialist with a GA-72Cd

Baku – APA. Azerbaijan National Agency for Mine Action (ANAMA) on Wednesday released a report on the unexploded ordnances (UXO) discovered in the Terter district.

According to the report, two UXOs, as well as the detonating fuse of a 122 mm artillery shell were seized as a result of the inspection conducted at five explosion sites in the Jamilli village of Terter.

The agency continues the operations.

The post SHDI in Azerbaijan appeared first on Schonstedt.

Schonstedt Instrument Company would like to congratulate Mr. Chris Clark[...]

A short film by documentarian Marco Grob and narrated by Daniel Craig follows “Douglas”, a UNMAS demining technician in Mali, who risks his life day in and day out in an effort to uncover and dispose of “the leftover detritus of war”.The post Mali Demining Film Features Schonstedts appeared first on Schonstedt Instrument Company.